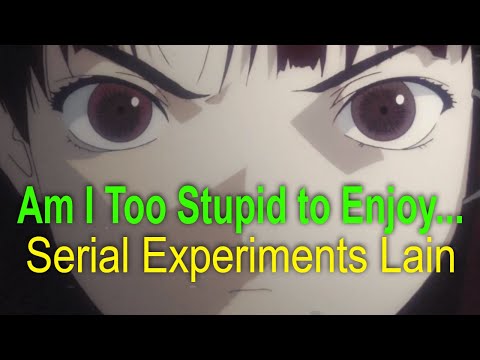 Does the abstract elements of philosophy, existentialism, fate, transience of memory, persona and identity, hinder the process of traditional storytelling, or am I just too stupid to enjoy Serial Experiments Lain?

I treasure depth, complexity and layered themes in anime. Especially as I watch a ton of Shounen which more often than not are in a reliable format of digestible story, simple world building, relatable underdog characters, conflict against villainy, and sweet sweet payoff.

So from time to time I will indulge in pallet cleansers. Shows with richer notes that truly make you think, instead of crawling through the typical story cycle consisting of the tragedy arc, training arc, tournament arc, and predictable zenkai power boost.

Off the top of my head I’m thinking of Psycho Pass, Kill la Kill, Neon Genesis, Death Note those kind of shows. Death Note and Psychopass in particular do a fantastic job battling individual morality, as well as conflicting ideologies and how they best serve a Utilitarian society. Light Yagami plays judge jury and executioner with his death note, and crime rates plummet. The dominators prevent latent criminals from breaking the law before they have even lifted a finger. Incarcerating would-be criminals that for all intensive purposes, are still innocent for the betterment of society.

Both Psychopass and Death Note have great themes that encourage you to explore your own standpoint on cultural issues and take a deep dive on your own sense of morality. BUT, Death Note and Psychopass would not be the hits that they are without on-point character builds, world setting, sound design and most importantly, excellent storytelling.

Are herein lies my problem. Why the heck did I find it so hard to get into Serial Experiments Lain? For its time, the concept of a dichotomy between your online and real world existence was mind blowing. And the surreal aspect of breaking that border down, and hacking the real world and people in it, was a staggering notion. So why do I feel like the execution of the story was so lackluster.

Comparing it across mediums to The Matrix movie released just a year later, also soaked in cryptic abstract elements exploring a fictional take of how we were transitioning over to the new millennia and age of communication, Serial Experiments Lain just didn’t pull its weight.

As a caveat, I enjoyed the story progression through episodes 10 to 13, however episodes 1 to 9 were painfully slow in pacing. In fact I would love to see the series edited down into a 90 minute long movie, or compromise to a Neon Genesis Evangelion analogue of contracting episodes 1 to 11 as a movie, and showcasing episodes 12 and 13 as a cinematic feature piece.

Or perhaps the packaging format is irrelevant and my gripes are more with an inability to relate with Lain, which irks me because I just about remember being online in 1998 experiencing the internet for the first time and being enamored. Maybe my disconnect is from boredom of the reused settings. Cyberia cafe, the school, her home and surrounding roads. Or a lackluster supporting cast that I held no attachment for and thus when Alice was in danger, I felt as just as much as I was invested in her as a character, absolutely nothing.

This has turned into a rant, and I’d like to shy away from taking a dump on a highly respected critically acclaimed series with a score of 8.02 on MAL. And it’s 20 years young so this a mature score that should reflect the community’s appraisal across a decent sample size to boot.

In summation, I lack the intelligence to enjoy Serial Experiments Lain. Or maybe it just sucks. Sorry not sorry.

Thanks for watching, if you like this video please subscribe and you’ll be telling me hey, you should make more videos just like this. I’ve made a ton of anime discussion videos so go check that out. Let me know what you think of Serial Experiments Lain and hit me up with some ideas for future videos. This was anime fried chicken, I’ll catch you next time. Cheers.