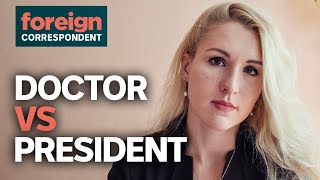 “They can kill me but they have no chance to shut me down.’ Dr Anastasia Vasilyeva

Dr Anastasia Vasilyeva is an unlikely threat to Russia’s most powerful man.

A single mother in her 30s, Dr Vasilyeva is an eye doctor who’s set up a doctors’ union.

But Dr Vasilyeva has been getting under the Kremlin’s skin, provoking vicious attacks by President Putin’s supporters.

“You are lying all the time. You are a group of liars…Do you even understand anything in virology?”, rants a state TV presenter. ‘You are an alliance of crooks, scoundrels, villains and bastards.’

“I’m only telling the truth…and all my sentences, all my words, I can prove with the facts”, says the doctor.

Dr Vasilyeva’s union - the Alliance of Doctors – is raising money to buy and deliver protective equipment to hospitals around the country.

Her message of a health system under pressure is at odds with the Kremlin’s line that everything is under control.

The pandemic wasn’t part of President Putin’s plans this year. He’d called a referendum which he hoped would install him as president until 2036.

But as the number of Russians infected by the virus sharply rises, Putin has had to cancel the vote. He’s struggling to keep control of the narrative. And the doctor.

Reported by former Russia correspondent Eric Campbell, Foreign Correspondent has gained rare access to film with Dr Vasilyeva and her team, as they travel around Moscow and beyond to deliver PPE to hospitals. We see her get arrested and imprisoned. And we see her slandered by State media.

Today Russia has the third highest number of COVID-19 cases in the world but in Moscow and other cities, the lockdown is starting to loosen.

Dr Vasilyeva warns the danger is far from over, with the virus taking off in the regions. She and her team continue to make deliveries, despite the abuse and the threats.


About Foreign Correspondent:
Foreign Correspondent is the prime-time international public affairs program on Australia's national broadcaster, ABC-TV. We produce half-hour duration in-depth reports for broadcast across the ABC's television channels and digital platforms. Since 1992, our teams have journeyed to more than 170 countries to report on war, natural calamity and social and political upheaval – through the eyes of the people at the heart of it all.


Contributions may be removed if they violate ABC’s Online Terms of Use http://www.abc.net.au/conditions.htm (Section 3). This is an official Australian Broadcasting Corporation YouTube channel 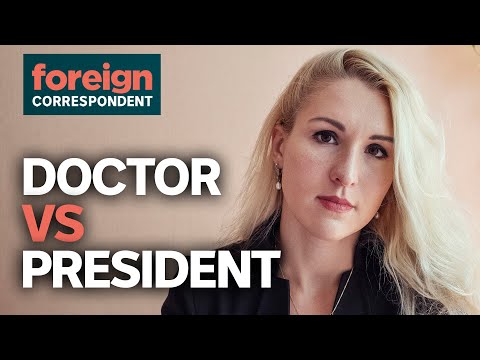