We Are Parable presents DEAD PRESIDENTS as part of the Secure The Bag Weekender.. Anthony Curtis is about from graduate from high school in 1969, but ... 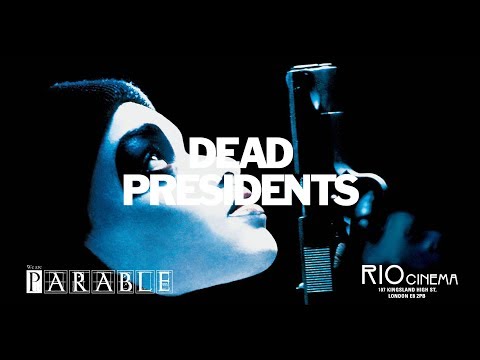 filmorus.ru
We Are Parable presents DEAD PRESIDENTS as part of the Secure The Bag Weekender..

Anthony Curtis is about from graduate from high school in 1969, but decides he's going to fight in the Vietnam War. When he returns, he has a family to care for but no job. His only option is to turn to a life of crime and pull off an audacious crime that will change his life forever.

From the makers of "Menace II Society", this energetic and visceral film is one not to miss.

We Are Parable presents INSIDE MAN as part of the Secure The Bag Weekender.

From the one and only Spike Lee comes his first ever studio film and his second highest grossing (After the recent BlacKkKlansman). Our final film in the "Secure The Bag" weekender flips the script and places the Black protagonist in the position of the police. Denzel Washington plays the cop hunting for the cunning thief Clive Owen, who's looking to steal extremely rare jewels...or is he?

A love letter to Spike's admiration of Al Pacino's Dog Day Afternoon, Inside Man keeps you guessing until the final frame.

We Are Parable presents “Secure The Bag” - a weekend of films in April that celebrate the heist movie - this time, with a difference.

We’ll screen three classic films that place Black protagonists at the heart of the action, whether they’re plotting the big hit, or protecting the general public.

Over two days, we’ll show the iconic “Set It Off”, “Dead Presidents” and Spike Lee’s “Inside Man” - films that firmly deserve their place in the canon of classic heist films!

The “Secure The Bag” weekender is supported by Film Hub London, managed by Film London. Proud to be a partner of the BFI Film Audience Network, funded by the National Lottery. www.filmlondon.org.uk/filmhub"

We Are Parable presents DEAD PRESIDENTS as part of the Secure The Bag Weekender.. Anthony Curtis is about from graduate from high school in 1969, but ...